Life is a Highway…

Yesterday, was the best day ever! Mr. Awesome Boyfriend and I went on a little drive with the NC. She handled like a dream. Our route took us through mostly mountain passes but that is what the Miata was built for. Being so light weight and having super handling gave us the power to take corners at speeds that would make regular cars shake with fear. We started in Pleasanton and took the foothill roads. Those are fun but mostly residential; so relax and cruise. We had the top down and it was a gorgeous sunny day.

Next, we took a turn towards Sunol. That was the first time I was able to really drive the car and see what it was made of. On this road, there are not too many cars but be weary of bicycle riders and people stopped on the side to take pictures. This is a mostly narrow road with little to no shoulder. The sights are pretty and the corners are sharp. As y’all know, I only upgraded the sway bars, tires, and brakes but with just those mods the car is amazing. I had no worries that the car would fail especially since some of those passes your on the edge on a mountain. The tires gripped the road incredibly well and the sway bars prevented any unwanted roll; if you zoom in on the map you can see all the turns and switchbacks on this run.
I can’t wait to get the new suspension and do a same route comparison.

We left the Sunol Pass and entered Calaveras for a pit stop. There was a great little Starbucks before the free way. We got our caffination on and headed back to the mountains. Mr. Awesome Boyfriend found state route 130 using his phone. We navigated our way there and blasted some music.

After getting used to the car’s abilities, this crazy twisty mountain pass was so much fun. I even let Mr. Awesome Boyfriend drive a little. ;-D He drove a lot more aggressive and even he was impressed with how the NC handled. This road had almost no traffic and no shoulders; so be careful. Also, there are a few times when the road goes into one lane; watch out for oncoming traffic. The view is great (your on top of a mountain)! The new brakes worked well but got very hot toward the end of the run (which was mostly down hill). We stopped for a 10min brake because the brakes were smoking. I’m thinking about getting the Miata MX5 Cold Air Brake Ducting Kit from Good-Win-Racing.

This is an exceptional run and wasn’t too short or long. We literally used only half a tank of gas. I highly recommend this route and the directions and map are posted below. 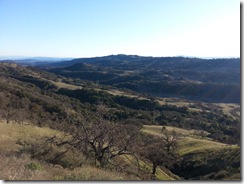 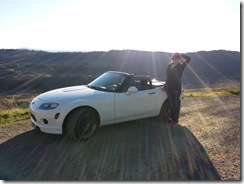